Peoples’ rights and global inequalities: the books on the 40 years of the Permanent Peoples’ Tribunal 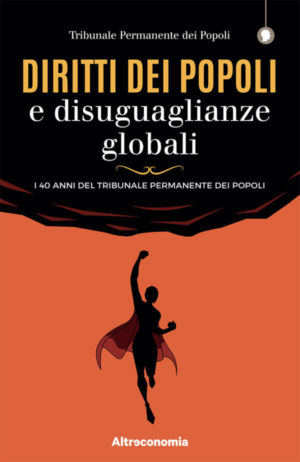 “Anniversary books are usually boring. This one really is not, because it helps us understand what has happened in this historic time through discussing facts collected from 47 sentences handed down by the trials held so far”

“This book offers a new vision of international law and of what should be its main function, that of building a less unfair world, where people feel welcome and where human suffering and violation of rights are recognised.”

This book offers a comprehensive re-reading of the work of the PPT and, through discussing its 47 sessions and verdicts, draws a map of the grand history of the people over the last four decades. It re-visits the most significant activities of the PPT that have accompanied great epochal global transformations such as: post-colonial struggles, the structural adjustments of the International Monetary Fund and of the World Bank, the return of war as a political instrument, the ‘detour’ of the constitutional states in the name of free trade, major infrastructural works, women’s fights for minimum wage and the renewed colonisation of Africa. In doing so, the book delves into the roots of the two juxtaposed realities mentioned in the title itself: people’s rights and global inequalities. These two realities represent the most irreconcilable and urgent dichotomy of our time.

Can the rights of people, a reality that is presupposed by international law whilst simultaneously being removed from political discourse, cohabit with the increasing concrete evidence of inequalities? Especially when these inequalities are so pervasive that they hold the power to erase the memory of the basic attribute of these rights: to be universal.

The book uniquely answers this question through its academic and methodological approach, pursued through an analysis of the most poignant judgements that compare the two real protagonists of our story: the rights and the economy. Each of these two protagonists pretends to acknowledge the other, whilst in reality ignoring one another; both belonging to their own universe of measures and constructs. In the official story delivered to mainstream society, both have found ways of respecting each other. However, in reality, life’s universal rights are only protected and defended if they do not interfere with those of the global economy. The implications of these irreconcilabilities are most dramatic for those who play both the role of owner of rights and of the optional and flexible variable of the economy.

Framed by two innovative and articulate essays by Franco Ippolito and Roberto Schiattarella, both respected representatives of law and economy, the under-taken path of research and reflection proposed allows one to re-live ‘in the present’ the evolution of the models, mechanisms and actors,   used to describe the rapport between people’s rights and the economy. This is done with the contribution of novel perspectives recommended in the indispensable essays of Leilo Basso, Julio Cortázar and Eduardo Galeano who have been without any doubt culturally and personally central in the story of the PPT.

Information on the book: